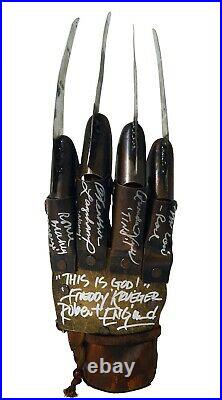 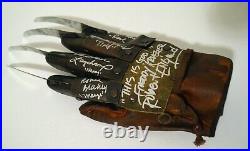 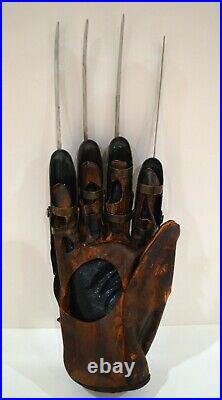 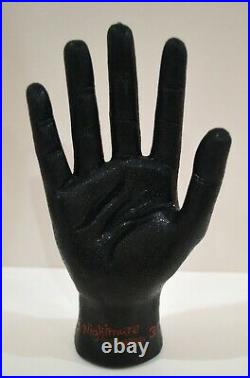 ROBERT ENGLUND “FREDDY KRUEGER” & HEATHER LANGENKAMP “NANCY”, RONEE BLAKLEY “MARGE”, AMANDA WYSS “TINA” & NICK CORRI “ROD” HAVE ALL AUTOGRAPHED THIS PIECE!! FIRST EVER CAST PRIVATE SIGNING!! MADE WITH 4 METAL BLADES AND SCREEN. ACCURATE FROM THE PROP WORN BY FREDDY IN PART 3 DREAM WARRIORS SIGNED INM SILVER PAINT PEN!! LICENSED BY NEW LINE CINEMA AND MADE BY NECA AND. WITH MANNEQUIN HAND THAT WILL FIT IN THE GLOVE AND STAND THE GLOVE UP!! WHO EVEN KNOWS WHAT THIS IS WORTH!!!! Robert Englund best known for playing the fictional serial killer Freddy Krueger, in the Nightmare on Elm Street film series. He received a Saturn Award nomination for Best Supporting Actor for A Nightmare on Elm Street 3: Dream Warriors in 1987 and A Nightmare on Elm Street 4: The Dream Master in 1988. His performance as Freddy Krueger in A Nightmare on Elm Street is ranked #51 on Premiere Magazine’s 100 Greatest Movie Characters of All Time. Despite his reputation for appearing in horror films, Englund is a classically trained actor. Heather Langenkamp is an American film and television actress. She is best known for her role as Nancy Thompson from the A Nightmare on Elm Street films. Ronee Blakley, amanda Wyss and Nick Corri also appeared in A Nightmare on Elm Street. This is a Neca officially licensed deluxe Freddy Krueger replica glove from New Line Cinema taken from the original mold and one size fits most adults. The large leather work glove is made with an open palm to allow your hand to breath. The fingers and back plate are crafted from thick copper finished metal and riveted to the leather glove. The copper metal and leather glove are hand antiqued to give this instrument of death a really creepy aged look. The glove is fully jointed, move your fingers and the glove makes the characteristic clattering sounds made famous in the movies. The total length of the glove is approximately 14 long. This piece comes authenticated by Authentic Signings, Inc. And comes with a photo Englund wearing the piece and a photo of the other cast members signing the piece. 3 tamper resistant are holograms affixed to each item. In Europe this is viewed as a weapon. We are not responsible if this does not make it. During our private signings celebrities typically sign several of the same item and our listing photos are used to show general quality and placement of the autograph. All autographs will be slightly unique as they are hand-signed by each celebrity Buyers will not necessarily receive the exact autograph shown unless otherwise specified in description, but you can be assured of receiving an un-smudged, quality signature. The item “Robert Englund Freddy Krueger Cast Autographed Nightmare Elm St Glove ASI Proof” is in sale since Wednesday, October 13, 2021. This item is in the category “Entertainment Memorabilia\Autographs-Original\Movies\Other Orig. Movie Autographs”. The seller is “authenticsigningsinc” and is located in Beverly Hills, California. This item can be shipped worldwide.