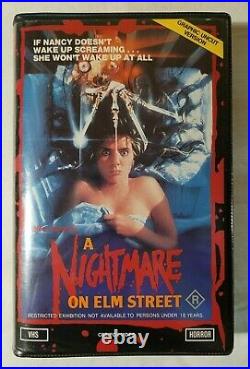 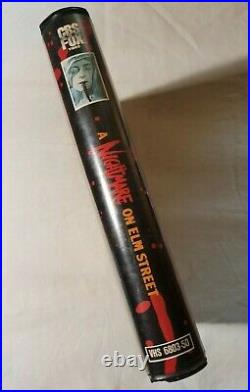 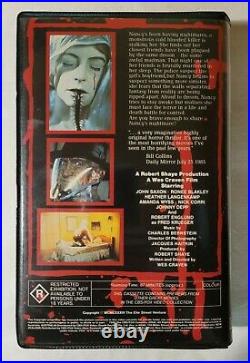 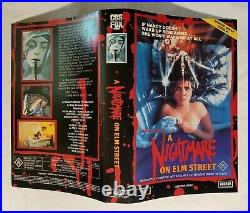 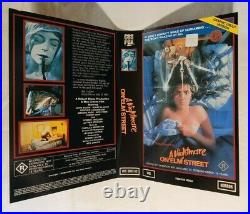 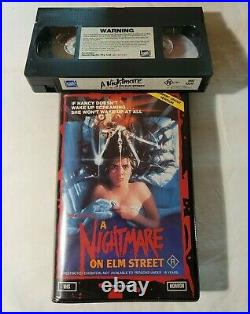 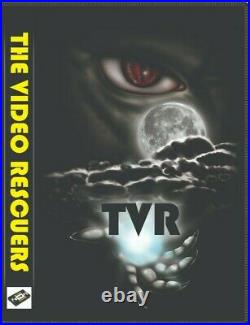 A Nightmare on Elm Street VHS 1984 Horror/Slasher Film by Wes Craven. 1986 CBS FOX Video. Non-Rental – Dual Cover. The cassette is a 1993 release, not the original. Very Good Used Condition (Non-Rental): Minor to considerable scuffs, scrapes and general wear to casing and clear plastic (CBS FOX Soft Casing). Minor wear/edging to cover image (two small stickers on reverse side). Minor splits to inside spine, otherwise cassette housing is undamaged (considerably yellowed) Very minor to minor scuffs and scrapes to cassette (1993 release cassette), otherwise in fantastic condition for its age and plays great. See pictures for full conditions. A Nightmare on Elm Street – 1984 American supernatural slasher film written and directed by Wes Craven and produced by Robert Shaye. It is the first installment in the A Nightmare on Elm Street franchise and stars Heather Langenkamp, John Saxon, Ronee Blakley, Robert Englund as Freddy Krueger, and Johnny Depp in his film debut. The plot concerns four teenagers living on one street in the fictitious town of Springwood, Ohio, who are invaded and killed in their dreams, and thus killed in reality, by a burnt killer with a bladed leather glove. A Nightmare on Elm Street was met with rave critical reviews and is considered to be one of the greatest horror films ever made, spawning a franchise consisting of six sequels, a television series, a crossover with Friday the 13th, and various other merchandise. A remake of the same name was released in 2010, and, aside from Stunts, Polyester, and Alone in the Dark, it was one of the first films produced by New Line Cinema, who by that point mostly distributed films, leading the company to become a successful film studio up till 2008 and was even nicknamed “The House that Freddy Built”. The film is credited with using many of the tropes found in the low-budget horror films of the 1970s and 1980s that originated with John Carpenter’s Halloween (1978) and led this subgenre to be called the slasher film. The film includes a morality play where sexually promiscuous teenagers are killed. Critics and film historians state that the film’s premise is the struggle to define the distinction between dreams and reality, manifested by the lives and dreams of the teens in the film. Critics today praise the film’s ability to transgress “the boundaries between the imaginary and real”, toying with audience perceptions. The film was followed by A Nightmare on Elm Street 2: Freddy’s Revenge. The item “A Nightmare on Elm Street VHS 1984 Horror Robert Englund 1986 FOX Vid Dual Cover” is in sale since Saturday, February 20, 2021. This item is in the category “Movies\VHS Tapes”. The seller is “the_video_rescuers” and is located in Oatlands, TAS. This item can be shipped worldwide.